“The number of people without enough food could rise significantly over coming months as the region moves deeper into the so-called lean season, the period before the April harvest when food and cash stocks become increasingly depleted,” WFP said in a news release. “Particularly vulnerable are smallholder farmers who account for most agricultural production.”

The cyclical El Niño pattern of devastating droughts on some regions and catastrophic floods in others that can affect tens of millions of people around the globe, is already leading to even worse drought across southern Africa, affecting this year’s crops.

With little or no rain falling in many areas and the window for the planting of cereals closing fast or already closed in some countries, the outlook is alarming.

“Driving through southern Zambia, I saw fields of crops severely stressed from lack of water and met farmers who are struggling to cope with a second season of erratic rains,” WFP Executive Director Ertharin Cousin said at the end of a visit to drought-prone southern Zambia.

“Zambia is one of the biggest breadbaskets in the region and what’s happening there gives serious cause for concern not only for Zambia itself but all countries in the region.”

Worst affected by last year’s poor rains are Malawi with 2.8 million people facing hunger, Madagascar with nearly 1.9 million, and Zimbabwe with 1.5 million and last year’s harvest reduced by half compared to the previous year due to massive crop failure.

In Lesotho, the Government has declared a drought emergency and some 650,000 people, a third of the population, do not have enough food. As elsewhere, water is in extremely short supply for both crops and livestock. Also causing concern are Angola, Mozambique and Swaziland. 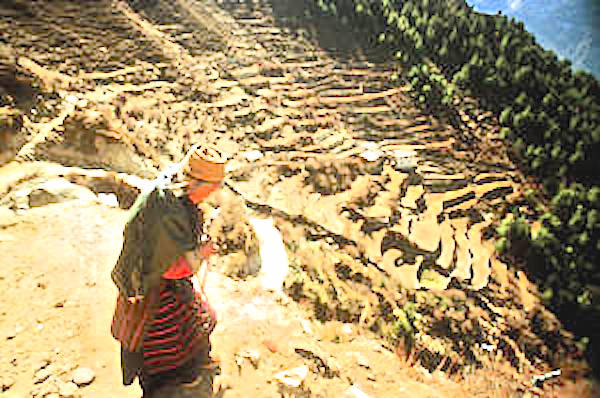 Mountain populations of Asia are particularly prone to vulnerability. A woman in traditional dress performs a prayer ritual in the Himalayas, Namche Bazar, Nepal.

While global hunger figures are decreasing, the number of food insecure people in mountain areas rose 30 percent between 2000 and 2012, according to a new study, released today by FAO and the Mountain Partnership on International Mountain Day.

That means that one in three mountain people, both urban and rural, in developing countries faced hunger and malnutrition, compared to one out of nine people globally.

And focusing on only rural mountain populations, which depend on natural resources such as land, water and forests for their livelihoods, the numbers get even starker: almost half of them are food insecure.

In 2005-2007 UNICEF ALGERIA has set up a magnificent project in S. W. Algeria: “Family gardens in the Saharawis refugee camps”.  In 2 years time more than 2000 kitchen gardens have been offered to the refugees.

Any reason why such a nice initiative can’t be repeated in other countries ?  Winter supplies and cash assistance isn’t changing a bit at the causes of the problems.  This is NOT sustainable development !

Warning of harsh winter conditions looming closer for more than eight million Syrian children living inside the war-ravaged country or as refugees around the region and beyond, the United Nations Children’s Fund (UNICEF) announced a package of assistance for 2.6 million Syrian children, including cash assistance, in addition to ongoing humanitarian programmes.

“These months are particularly brutal for children. They are at higher risk of developing respiratory infections in the cold weather, and – tragically — they are also in danger when families burn plastic or other toxic materials inside their shelters to keep warm,” said , UNICEF Regional Director for the Middle East and North Africa, Peter Salama in a news release.

According to UNICEF, early weather reports indicate that this winter could be harsher than last year’s with temperatures in some mountainous areas dropping as low as minus 13°C during the coldest days of December and January, along with possible storms and heavy snowfall which could cause hardship for families who are struggling to survive even in normal conditions.

The Syrian crisis has displaced more than three million children inside the country, sometimes multiple times and in neighbouring Turkey, Lebanon, Jordan, Iraq and Egypt more than 2, 2 million children are now living as refugees, UNICEF said.

The UN agency said that many families’ financial resources are exhausted after five years of continued crises, making purchases of even essentials like warm coats and scarves impossible.

The package of assistance to be provided by UNICEF will support 2.6 million Syrian children living inside the country and across the region, with the focus mainly on children who have been hit the hardest, including the internally displaced and those living in hard-to-reach areas or in informal tented settlements.

According to UNICEF, work is underway in Syria to provide up to one million children with winter support, including the distribution of locally procured clothing kits, blankets and school heaters in addition to the distribution of cash vouchers – allowing families to buy their own winter needs.

During the lean season, families in Wurotorobe, Burkina Faso, struggle to have at least one meal per day, but often they only calm the worst hunger. The poor diet makes small children extremely vulnerable to epidemics and disease. Photo: OCHA/Ivo Brandau

United Nations officials today called on youth to champion the cause of ending hunger, achieving food security and improving nutrition – one of 17 Sustainable Development Goals (SDGs) world leaders committed themselves to on Friday.

The call came at a high-level event entitled “Mobilizing Generation Zero Hunger,” held on the margins of the Sustainable Development Summit at UN Headquarters, brought together young entrepreneurs and activists from around the world, along with global leaders, policy makers and celebrities to discuss how mobilizing this generation to champion sustainable agriculture, food security and nutrition can help make zero hunger and sustainable development a reality.

Ending hunger is Goal 2 of the SDGs, which collectively aim to ensure the long-term well-being of the planet and its people.

“The global goal to end hunger, achieve food security and improve nutrition is one of the most critical,” Mogens Lykketoft, President of the 70th session of the UN General Assembly, said at the event.

“While the number of people suffering from hunger in developing regions has fallen by half since 1990, there are still close to 800 million people undernourished worldwide, a majority children and youth,” he noted.

Agroforestry, diversification of crops with legumes and other practical measures must be scaled up to end hunger while meeting the challenge of climate change, United Nations Secretary-General Ban Ki-moon told a global conference on the issue today.

“Agriculture is a major contributor to global greenhouse gas emissions. At the same time, famers worldwide are increasingly feeling the effects of a warming climate,” Mr. Ban said in a message to the Third Global Conference on Agriculture, Food and Nutrition Security and Climate Change taking place in Johannesburg, South Africa.

“The answer to these interconnected problems lies in climate-smart agriculture,” he said, emphasizing in particular the need to eliminate of childhood under-nutrition through sustainable agriculture that benefits smallholders around the world.

Mr. Ban said that his recent visit to the Sahel reinforced his perception of how climate change compounds the challenges for small farmers, following three major droughts in a decade that exacerbated poverty, conflict and disease.

“The region’s Governments are working to help their people become more resilient, but they need international support, including through an ambitious climate change agreement in 2015,” he said.

Fighting poverty, hunger and malnutrition with neglected and underutilized species

Despite getting little attention from researchers, crop breeders and policymakers, neglected and underutilised plant species (NUS) play a vital role in household nutrition for millions of families. This short, attractively presented guide outlines their value to food security, food system resilience, nutrition, livelihoods and cultural identity, drawing on success stories from around the world. In India and Nepal, for example, NUS have played a prominent role in empowering women and boosting their self-esteem and self-confidence. In Bolivia, a partnership with a coffee-shop chain helped popularise new snacks made from amaranth flour.

Speaking from Niger, a top United Nations official on Sunday appealed to the international community to provide the resources needed to help millions in crisis in the Sahel region of West Africa, warning that the situation is critical and there is no time to lose.

“This is one that the international community cannot and must not ignore,” said the Executive Director of the World Food Programme (WFP), Ertharin Cousin, in a telephone interview from Niger’s capital, Niamey.

Accompanied by the UN High Commissioner for Refugees António Guterres, Ms. Cousin is currently in Niger to raise awareness of the crisis and mobilize support for emergency assistance to the people affected in the country and in neighbouring Mali.

There are currently 15 million people facing food insecurity in the Sahel, which stretches from the Atlantic Ocean to the Red Sea, and includes countries s
uch as Niger and Mali. The trip is Ms. Cousin’s first field visit since assuming the leadership of WFP one month ago.

She stressed that the situation is critical following the recent drought which has brought hunger for the third time in recent years.

“Niger is again facing a crisis of a failed harvest because last season the rains did not come. A failed harvest is always a food security crisis,” Ms. Cousin said. “Because the rains failed last season, what you’re seeing is that the hungry poor, the most vulnerable populations, are now at the point where they have depleted their assets. And as a result, they have no food.”

In Niger, WFP has launched an emergency operation to support 3.3 million people, with a special focus on children under two. Some 35 per cent of people being assisted will receive cash. Over 423,000 thousand people have already received support through food-for-assets and cash-for-work programmes.

As part of their three-day visist, the two UN senior officia
ls are meeting with some of the thousands who have fled fighting in neighbouring Mali. The refugees have put a further strain on communities in Niger that are already facing a food crisis.

“In this case, the crisis is different than it’s ever been in the past,” said Ms. Cousin. “It’s even more complicated because of the evolving conflict situation in Mali as well as the high food prices.”

WFP estimates it needs some $450 million to help people across the region. “We have about three to four weeks for the international community to invest in WFP and other UN partner organizations working in the Sahel,” the food agency chief said.

Last month, Secretary-General Ban Ki-moon called on the global community to act quickly to address what he described as a “cascading crisis” sweeping the Sahel.

“The statistics are sobering: 15 million people are directly affected. More than 200,000 children died of malnutrition last year — and another one million are threatened right now,” he had sa
id in an address to the Luxembourg Parliament.