The world is changing rapidly, across urban and rural areas. Growing demand for food – driven by population increase and rising incomes – is creating opportunities and challenges for people working in rural areas, including in smallholder agriculture and in the non-farm economy.

Rising agricultural productivity, more jobs off the farm and migration to cities are reshaping rural life – but so too are adverse factors such as climate change, environmental degradation and other risks.

Small farms continue to provide livelihoods for up to 2.5 billion people and account for up to 80 per cent of food produced in Asia and sub-Saharan Africa. In a fast-changing world, rural areas must transform – and rapidly – in order to be sustainably included in growing economies and to contribute to overall prosperity. 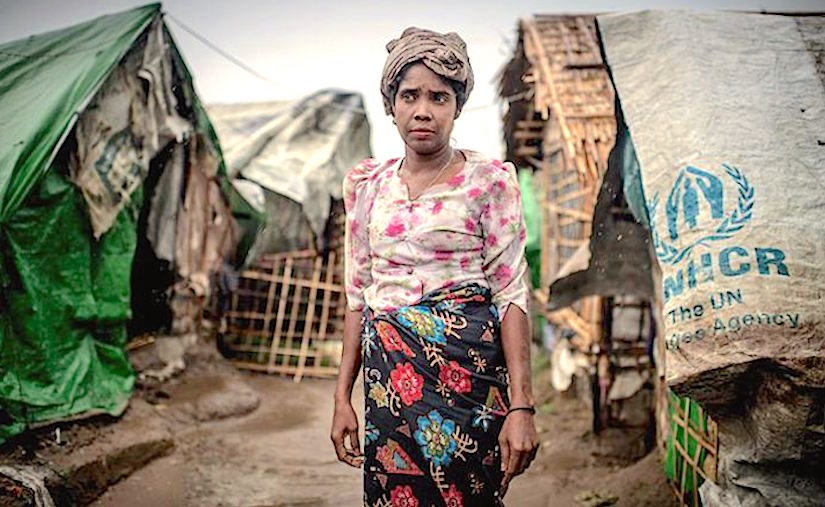 Sarah McColl has written for Yahoo Food, Bon Appetit, and other publications. She’s based in Brooklyn.

Research by the FAO shows that investment in agriculture is five times more effective in reducing poverty and hunger than investment in any other sector. A joint report from the FAO, WFP, and the International Fund for Agriculture Development presented last month found that a $105 billion investment in rural development, targeting small-scale irrigation and infrastructure systems like food processing to reduce postharvest waste and loss, could close the hunger gap.

Women farmers in Myanmar. In rural areas, pro-poor investments should support family farmers and other small-holders in a variety of ways.

10 July 2015, Rome – Eradicating world hunger sustainably by 2030 will require an estimated additional $267 billion per year on average for investments in rural and urban areas and in social protection, so poor people have access to food and can improve their livelihoods, a new UN report says. This would average $160 annually for each person living in extreme poverty over the 15 year period.

Prepared by FAO, the International Fund for Agriculture Development (IFAD) and the World Food Programme (WFP), the report, which was presented in Rome today, comes ahead of the Third International Conference on Financing for Development in Addis Ababa, Ethiopia on 13 – 16 July 2015.

The report notes that despite the progress made in recent decades, today nearly 800 million people, most of them in rural areas, still do not have enough food to eat.

Eliminating chronic undernourishment by 2030 is a key element of the proposed Sustainable Development Goal 2 of the new post-2015 agenda to be adopted by the international community later this year and is also at the heart of the Zero Hunger Challenge promoted by the UN Secretary-General.

“The message of the report is clear: if we adopt a “business as usual” approach, by 2030, we would still have more than 650 million people suffering from hunger. This is why we are championing an approach that combines social protection with additional targeted investments in rural development, agriculture and urban areas that will chiefly benefit the poor,” said FAO Director-General José Graziano da Silva.

“Our report estimates that this will require a total investment of some US$267 billion per year over the next 15 years. Given that this is more or less equivalent to 0.3 percent of the global GDP, I personally think it is a relatively small price to pay to end hunger,” Graziano da Silva added.

“This report helps us to see the magnitude of the challenge ahead of us, but we believe that we won’t see gains in reducing poverty and hunger unless we seriously invest in rural people,” said IFAD President Kanayo F. Nwanze.

From social protection to production

Social protection in the form of cash transfers will eliminate hunger immediately, and will improve nutrition by allowing the poor to afford more diverse and thus healthier diets and also fight “hidden hunger” – micronutrient deficiencies, including the inadequate intake of vitamins, iron and other minerals.

Given their meagre means and assets, people living in extreme poverty are initially not expected to be able to invest much in productive activities. However, as they become more productive through investments, they will earn more, and also save and invest more, and thus further increase their earnings. 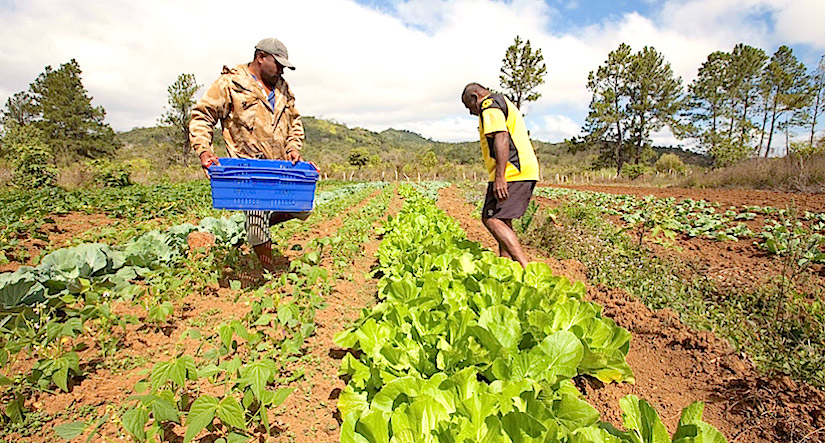 Helping farmers adapt to the impacts of climate change can also significantly reduce greenhouse gas emissions, finds a new study released today by one of the agricultural agencies of the United Nations system.

“What this report shows is that smallholder farmers are a key part of the solution to the climate change challenge,” said Michel Mordasini, Vice President of International Fund for Agricultural Development (IFAD). “With the right investments, smallholders can feed a growing planet while at the same time restoring degraded ecosystems and reducing agriculture’s carbon footprint.”

IFAD chose UNESCO’s Our Common Future under Climate Change Science Conference in Paris to release details of its latest research with the Research Program on Climate Change, Agriculture and Food Security of the Consultative Group on International Agricultural Research (CGIAR).

The study finds reducing emissions may not be as big a burden as some may believe and could be another benefit of adaptation activities. The study, released today, examines IFAD’s portfolio of projects focused on making smallholder agriculture more resilient to climate change.

We can win the war against hunger, provided we strengthen access to food, sustainability becomes our watchword, and we adequately address the challenge of climate change.

Mapping the Way to Zero Hunger

The number of undernourished people in the world has been brought downby over two hundred million since 1990 mainly thanks to increased political commitments to act against hunger. This has happened even as the planet’s population grew by two billion – and despite higher cereal prices starting almost a decade ago and the more recent global economic slowdown. This tells us that a world without hunger is not a dream, but something we can make real.

This year marks the endpoint of the efforts associated with reaching the first Millennium Development Goal (MDG) hunger target, which aimed at halving the proportion of hungry people in developing countries. A majority of the countries monitored – 72 out of 129 –have achieved the MDG hunger target and developing regions as a whole missed it by a small margin. Today, just under 13 percent of the developing world’s population is undernourished, down from 23.3 percent in 1990.

Still, hunger remains a grim reality for almost 795 million people, or one out of nine persons worldwide, according to our latest global assessment. So we need to aim higher –to make hunger history.

Local government agencies in Viet Nam have expressed support for the ‘Climate-Smart, Tree-Based, Co-Investment in Adaptation and Mitigation in Asia’ (Smart Tree-Invest) project, co-funded by the International Fund for Agricultural Development (IFAD) and the CGIAR Consortium Research Program on Forests, Trees and Agroforestry, during a visit from the regional project team from Bogor, Indonesia, that took place from 11-14 March 2014.

Following research activities carried out in the first year of Smart Tree-Invest, the second and third years will focus on: identifying threats to farmers’ resilience, including changes in ecosystem services, climate patterns and other environmental and socio-political changes; and developing co-investment schemes that promote climate-smart, tree-based agriculture, enhance the provision of ecosystem services in the watershed and improve smallholders’ livelihoods. 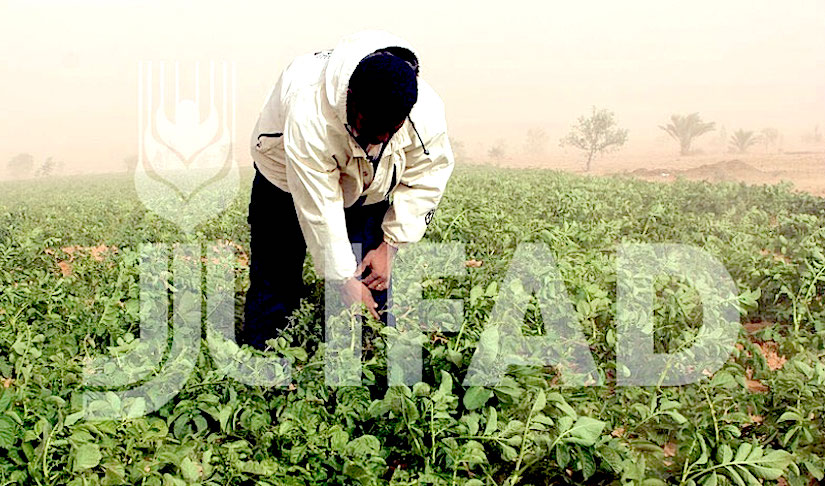 The objective of AgTalks is to share the latest thinking, trends and research on policies and innovations in small-scale farming.

In his AgTalk, Pablo Tittonell, Professor and Chair of the Farming Systems Ecology Group at Wageningen University, argues that by taking advantage of soil’s natural processes a lot more land could be used productively, helping to meet the world’s growing food needs and to reduce agriculture’s carbon footprint.

Each AgTalk is recorded as part of a live event hosted by IFAD, and is released biweekly. Subscribe to IFAD’s YouTube channel to be notified about every new release. 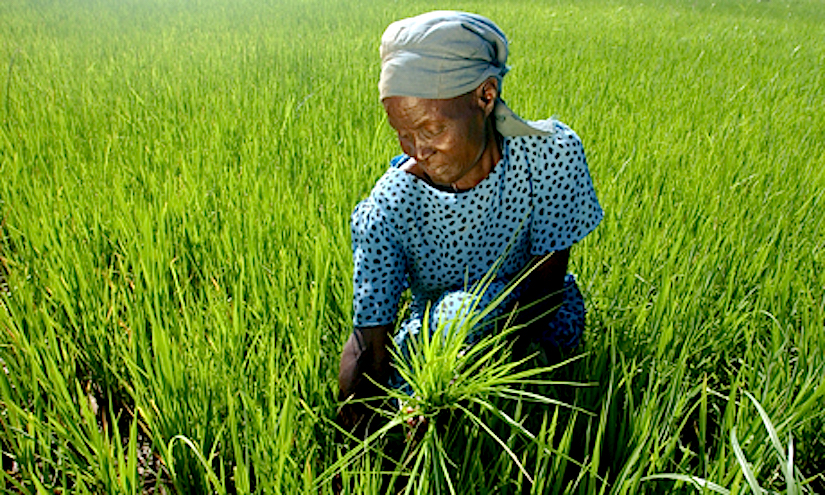 At the Rome event, leaders from the Food and Agriculture Organization (FAO), the International Fund for Agricultural Development (IFAD) and the World Food Programme (WFP) shared testimonials of their innovative interventions that have empowered rural women, and in doing so have contributed to food security and nutrition. They also highlighted that promoting gender equality and women’s empowerment can significantly strengthen efforts to reduce rural poverty.

This year’s event also marks the 20th anniversary of the landmark Fourth World Conference on Women in Beijing in 1995 (Beijing +20).

IFAD President Kanayo F. Nwanze delivered the opening keynote address pointing out that as men in developing countries migrate to urban centers or shift to better-paid work, a “feminization of agriculture” has occurred with approximately half of the agricultural workforce worldwide now made up of women.

“Women are the backbone of rural societies as they grow and process food and make sure their families are well-fed and well-nourished,” Nwanze said. “Too often, rural women are doing the backbreaking work. To improve women’s social and economic status, we need more recognition for the vital role they play in the rural economy.  Rural women need more opportunities to participate, improve their skills, gain access to assets, and be involved in agricultural production and marketing. Let us all work together to empower women to achieve food and nutrition security. For their sake, and the sake of their families and communities.” 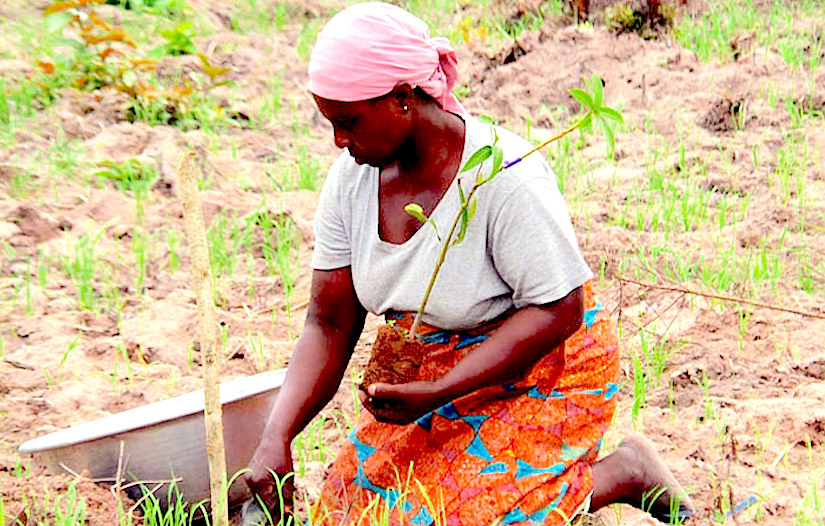 A woman planting a shea tree (Vitellaria paradoxa )in Ghana to protect riverbanks, and for her economic empowerment. Shea butter is eaten or sold for cosmetics. Photo: IFAD/Dela Sipitey

Ahead of International Women’s Day, United Nations food relief agencies gathered to remind the world that women farmers play a central role in achieving food and nutrition security, urging countries to step up efforts to empower rural women who too often do “backbreaking work” to harvest food.

“Women are the backbone of rural societies as they grow and process food and make sure their families are well-fed and well-nourished,” said International Fund for Agricultural Development (IFAD) President Kanayo Nwanze in his opening remarks at an event in Rome, where the UN food-related agencies are headquartered.

“Rural women need more opportunities to participate, improve their skills, gain access to assets, and be involved in agricultural production and marketing. Let us all work together to empower women to achieve food and nutrition security. For their sake and the sake of their families and communities,” he added.

Joining the IFAD President were leaders from the UN Food and Agriculture Organization (FAO) and the UN World Food Programme (WFP) to share their approaches to empowering rural women, promoting gender equality and women’s empowerment in an effort to reduce rural poverty.

This year’s International Women’s Day – celebrated around the world 8 March – also marks the 20th anniversary of the landmark Beijing Platform for Action. However, despite that historic agreement by 189 governments, no country in the world has yet achieved gender equality.

The food agencies highlighted the “feminization of agriculture,” a new trend sparked by the migration of men in developing countries to urban centres. Approximately half of the agricultural workforce worldwide is now made up of women. 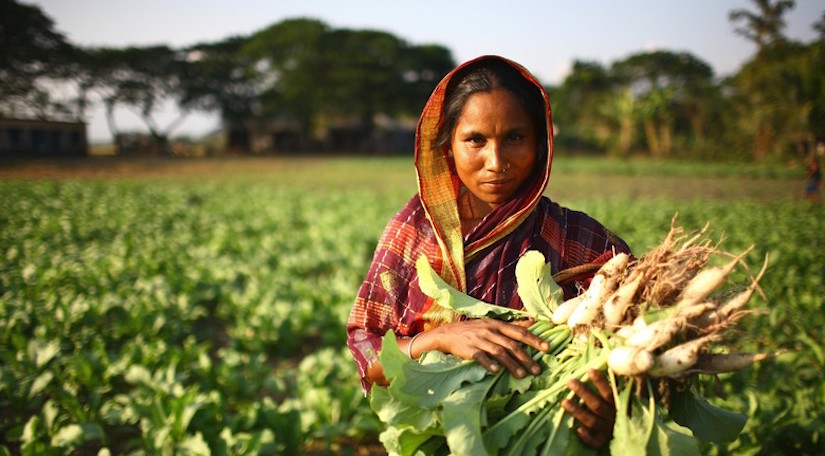 The programme, “Accelerating Progress Toward the Economic Empowerment of Rural Women

Smallholder farmers and rural people can play a critical role in achieving the post-2015 development agenda, according to a concept note by the International Fund for Agricultural Development (IFAD). ‘Rural transformation: Key to sustainable development’ stresses the role of targeting rural areas and reducing rural-urban inequalities to achieve sustainable development and eradicate poverty and hunger.

IFAD prepared the concept note in preparation for its 38th session of the Governing Council, which will focus on rural transformation as a key to sustainable development.

Economic diversification, innovations in production, modern technology use and expanded access to modern supply chains are key features of rural transformation, according to the note. It explains that IFAD invests in four key areas to advance inclusive and sustainable rural transformation: promoting diversification and resilience; advancing gender equality and empowering women; building sustainable food systems; and enhancing rural-urban connectivity and linkages. The concept note argues for addressing unequal power relations, social exclusion and access to a range of productive assets as part of strategies to address persistent poverty.